Judith conducted a medical outreach at Mangaba/Nabbanda villages this past week. It was requested because there is a stomach problem going about. While she was there she and Jennifer Chilimina taught a group of women from the church. Their teaching combines health and Bible.

There were 34 women who attended the class. The subjects were nutrition, sanitation and personal care as well as encouragement in being a Christian woman.

After the class she conducted the medical. There were 127 who received care. I found out later that she had run out of some of the medications that we purchase in Lusaka at the chemist’s. I reminded Charles (and her) that I need to be kept informed when she is getting low on medications. I had received funds from the ladies class at Cameron Road in Austin. With those funds we purchased $250 worth of medications. It should last for several months depending on the demand. 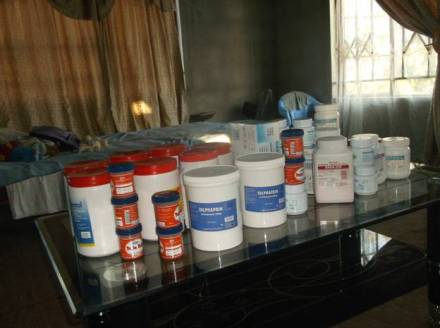 The people of the villages are very appreciative of our efforts on their behalf. Judith and Jennifer do a good job. Several other villages have asked that we bring a medical to their location. Some want us to return before we have been able to get to some of the other villages. Saying no becomes important at times to keep our coverage balanced and help as many as we can.

Special thanks to the ladies of Cameron Road for their generosity.

I have been asked to make my trip to Zambia so that I can be there for the village lectureship the first of September. With that in mind I will likely be traveling the end of August.

Charles has said that we need to return to the Northern province this year; especially to the Muyombe area as well as Nakonde. He also said that we have been requested to come to the area of the Copperbelt. I do not know what the schedule will be like. They will be meeting the first part of April to discuss the agenda.

I am still working on this blog thing. I would like to do it more regularly but need to space it out some. I don’t want to be doing it if there is not news but it is a good way to keep folks up on what is happening in Zambia.