I thought I would show you the Gospel Chariot. 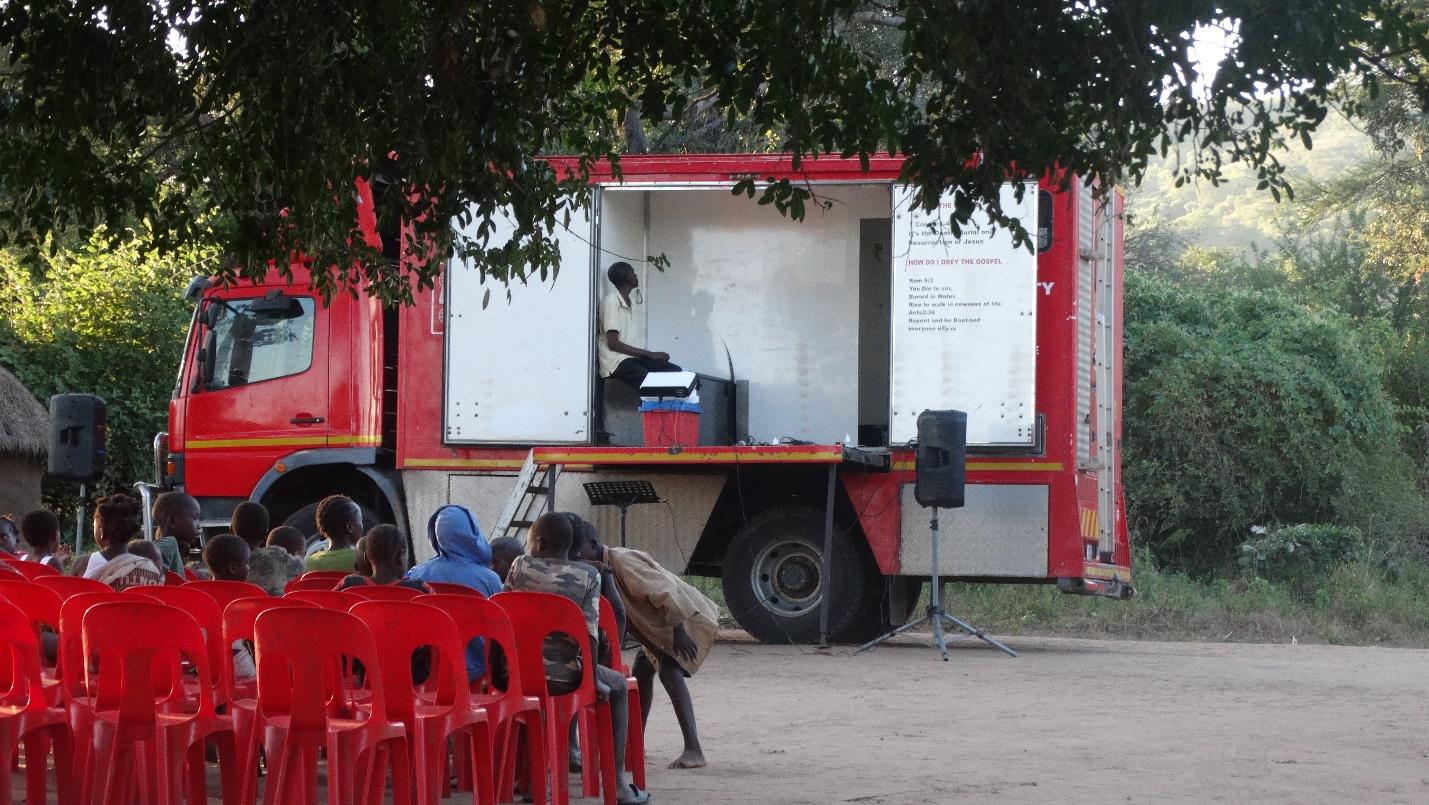 You can see from the brother sitting inside the size of the vehicle. It is self-contained for two occupants. There is a sleeping section and storage. I believe there is no place to cook or eat. As you see there is a platform that lowers to be a stage. Then the doors are opened. Inside there is a pool for baptisms (the man is sitting on it). The back wall is where they project the film. To the right on the back wall is the entrance to the area where those who are to be baptized can change. There is a PA and speakers for sound.

Tonight is our first presentation in the Village of Lumbembe. Once they started coming they just came and came. Our count was over 207 for the evening. There were a lot of children. It was a significantly larger gathering that at Bbendele, but then, Lumbembe has 5 times as many people. The church leader here is Hamfuti. He is also one of the village headmen, so his word carries a lot of weight

The church is Lumbembe numbers around a hundred in attendance. It is a strong church with good leadership. 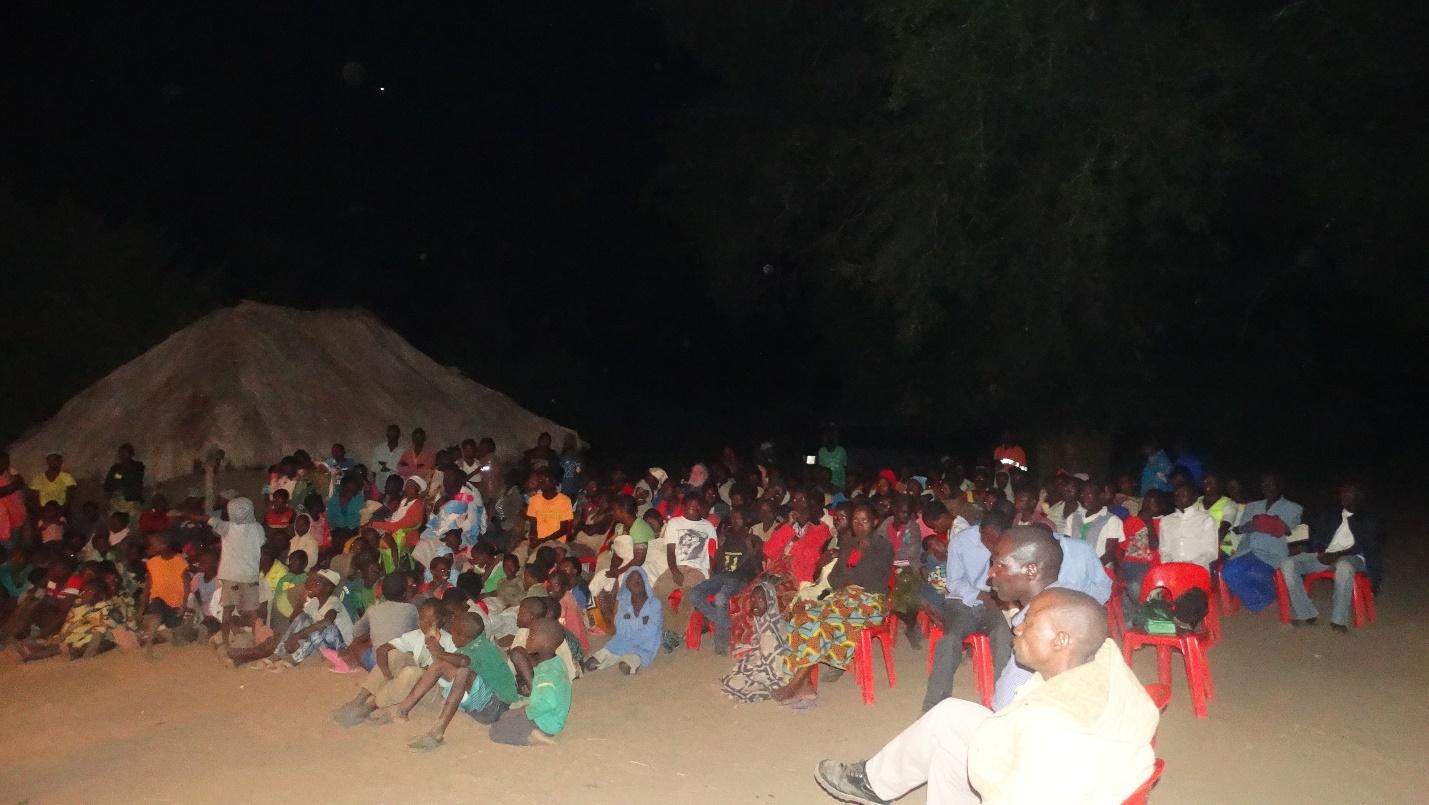 I speak first. My topic is who is Jesus. I try to make some connection to what they are seeing on the screen of the life of Jesus.

Preaching in village settings is sometimes challenging because, unlike in the US, there is often a great deal of movement. If you are easily distracted it is much more difficult. I learned later as Charles and I were talking that it is likely that much of the disturbance was instigated by some of the denominational churches in the village. There were women talking all the time and the children were particularly unruly. Charles said that when visitors are present the children do not normally behave as they did. I do know that when we started the church in Lumbembe it grew from just a few to a substantial number, many from the denominational groups. I have had some experience in the past with denominational preachers disrupting meetings, so I guess it goes with the territory. 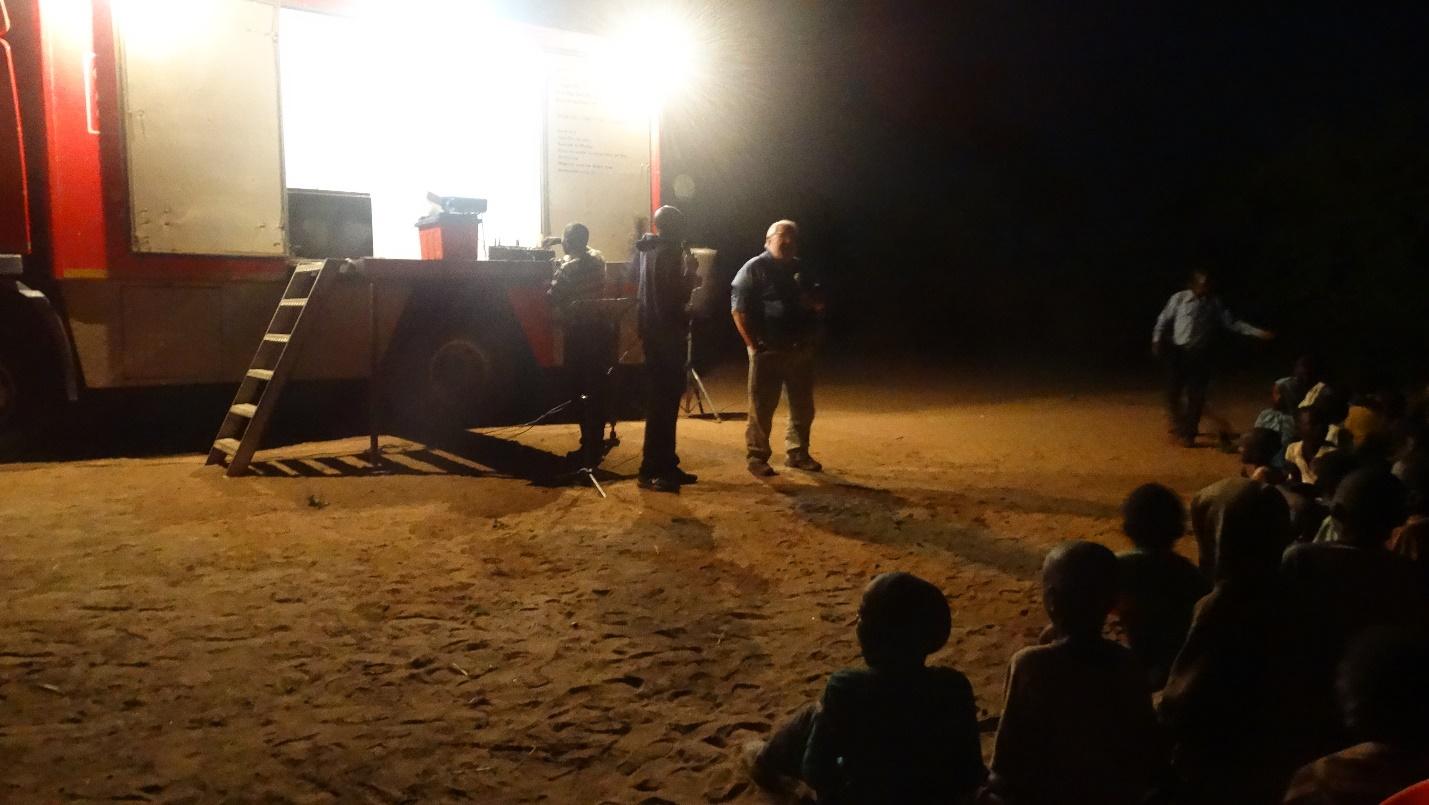 When Charles did the inviting we had 4 respond to be baptized. To date, we have had 12 baptisms and 2 restorations.

Tonight is the last night in Lumbembe. One of the problems we have encountered is that there are a large number of mosquitos. In the last 8 or so years I have not encountered so many. Ah well… 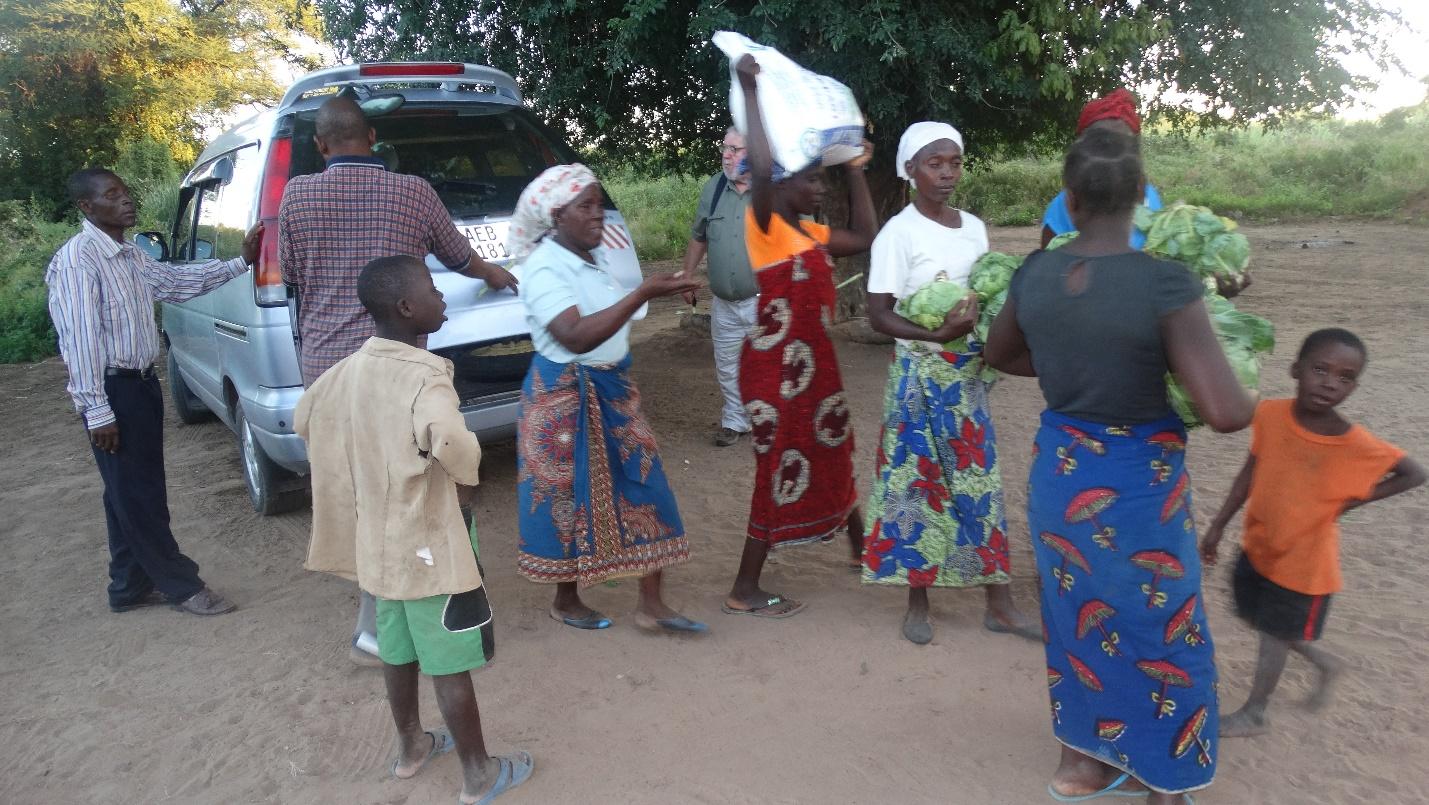 Pictured here are some ladies picking up my contribution to the funeral of a local lady. Funerals in Zambia are a big thing lasting several days. Our program coming at the same time as her funeral could be interpreted as disrespecting. Contributing toward the feeding of the many mourners is a way of demonstrating consideration. A bag of meal, some cabbages and cooking oil were well received when we paid our respects to the family.

I have been the first speaker at the break. I am trying to stay focused on Jesus since that is the subject of the film being shown. Tonight I start with Hebrews 1:1-2 and how in the past God spoke through prophets but now speaks through his Son. 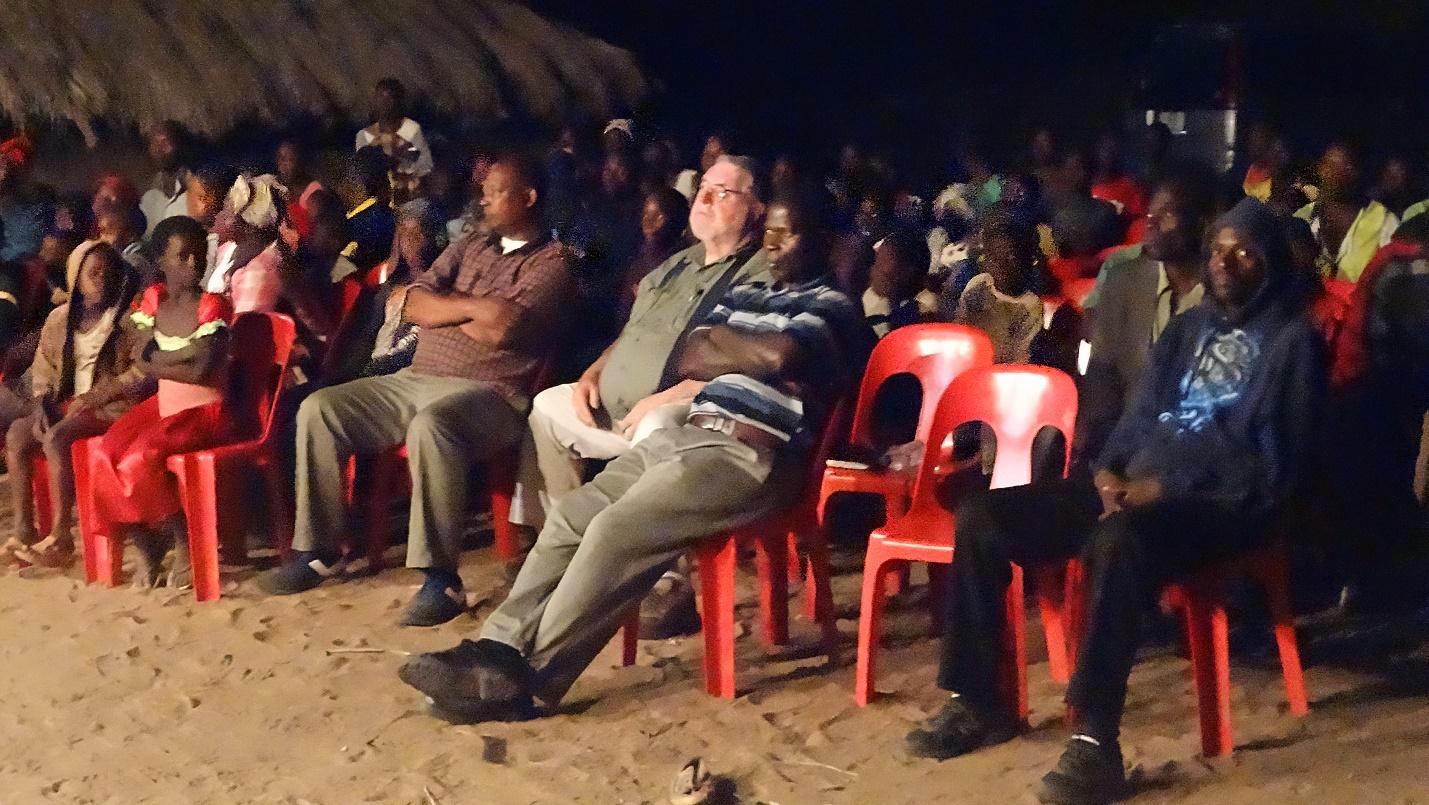 The crowd tonight was approximately 247. Always a lot of children in most of the villages but still a sizable number of adults. 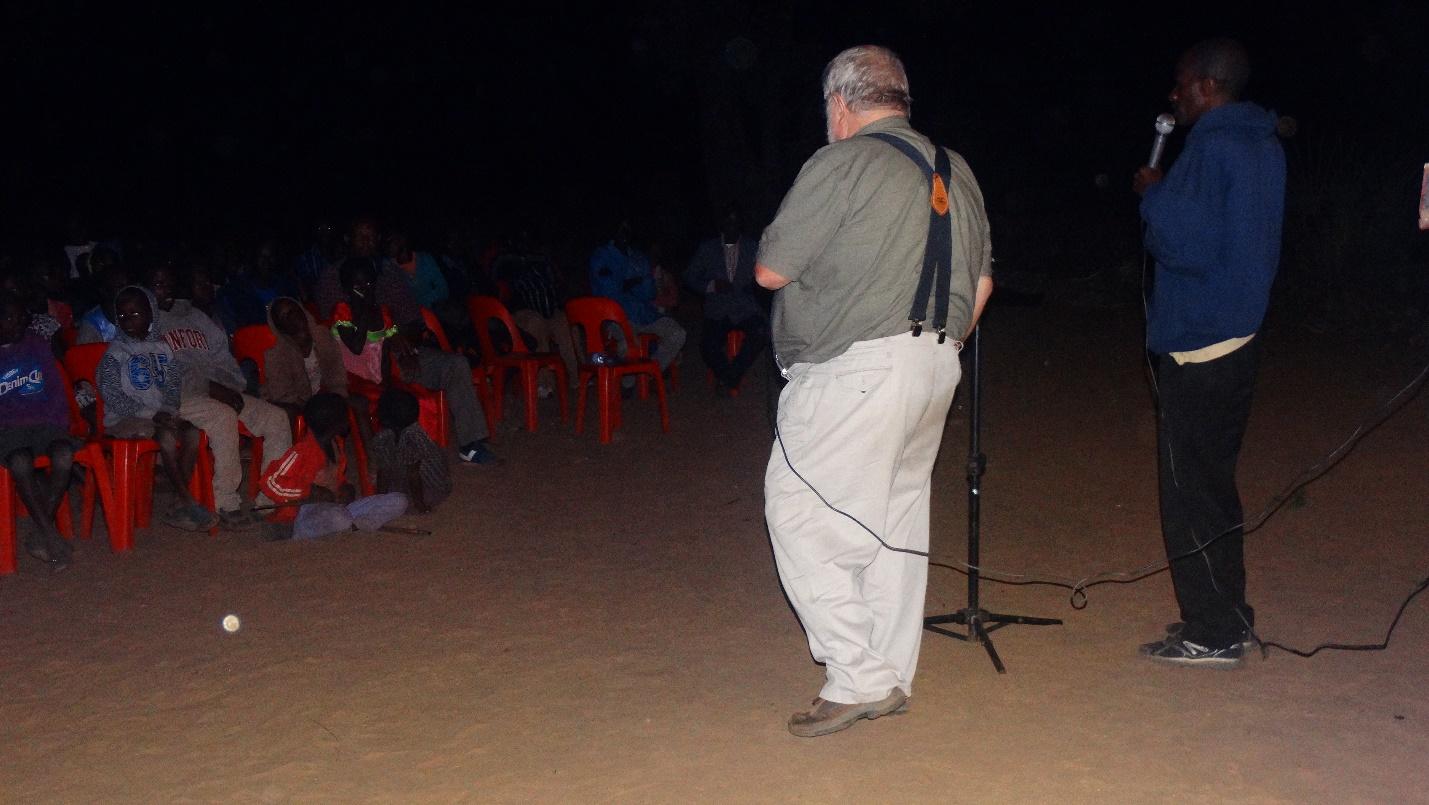 (I apologize for the photos but they are taken at night with the very bright spotlights of the truck on so it is hard to get good quality pictures) The second speaker tonight was one of the men on the Chariot. Robert from Malawi. He seems quite typical of many African preachers. He seems to yell his presentation. Everyone who uses the microphone holds it right up next to their mouth which distorts what is said. I want to sit and talk with some about how they use it, politely and respectfully of course. 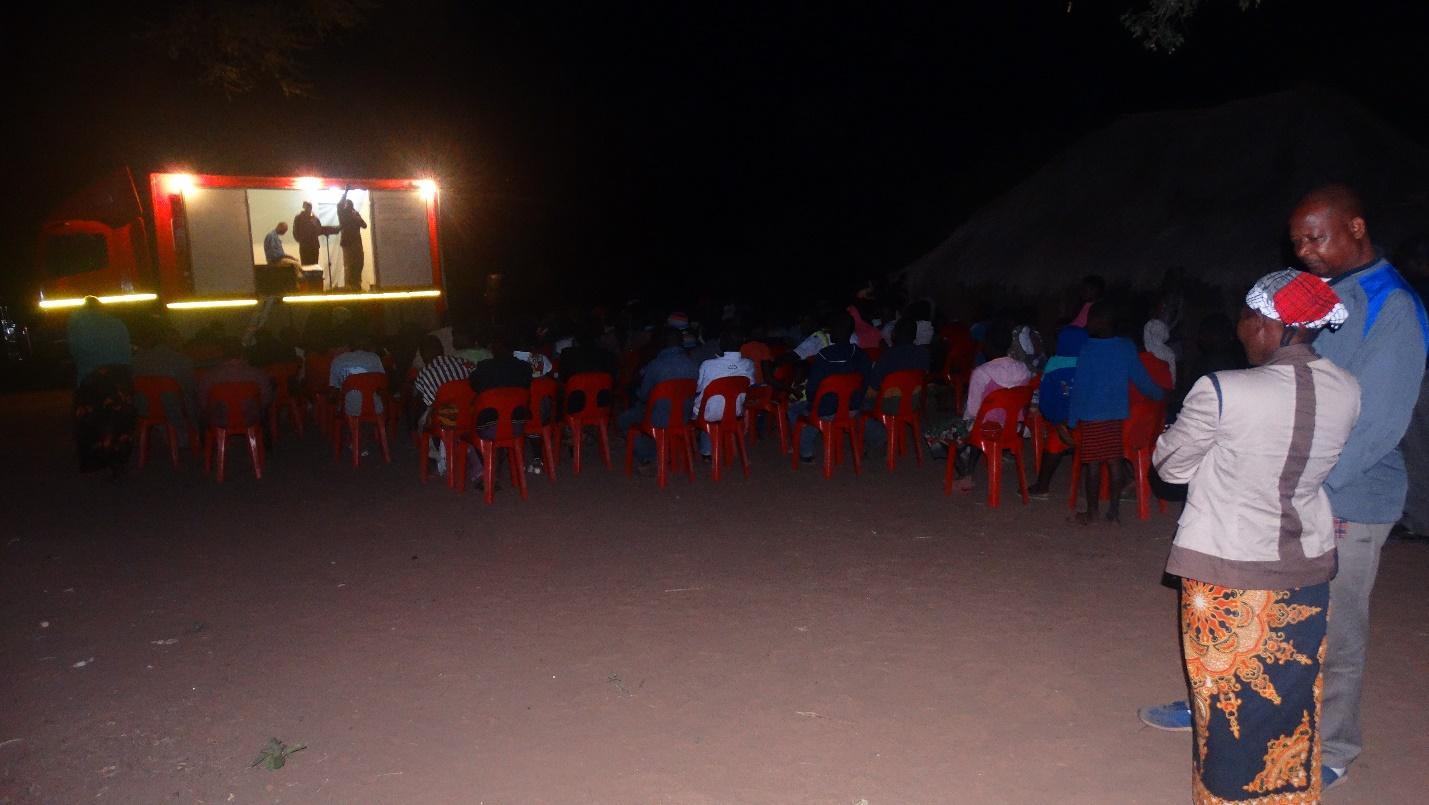 In the end there were 4 baptisms. After a meal of chicken, rape (a vegetable like greens) and nsima made from sorghum we headed home for the night. Tomorrow we will be in Nakafue which is nearer to Chirundu. Chirundu is about 90km from Siavonga.

Due to the distance from Siavonga we leave by 2:30 for a program that will not begin until after 6 pm or later. Nakafue is located about 10 miles off the main paved road. Part of the road is not too bad but that last half is really rough and slow going. The village is really spread out. The site that is chosen is the medical clinic. It is a small building made of burnt bricks. It does not look like much but medical personal come out once a week from the hospital in Chirundu.

When we arrive we learn that the Chariot has gone to the wrong site. So, we sit to wait. After about 45 minutes we hear them coming. This late arrival and set up will delay the start of the program. 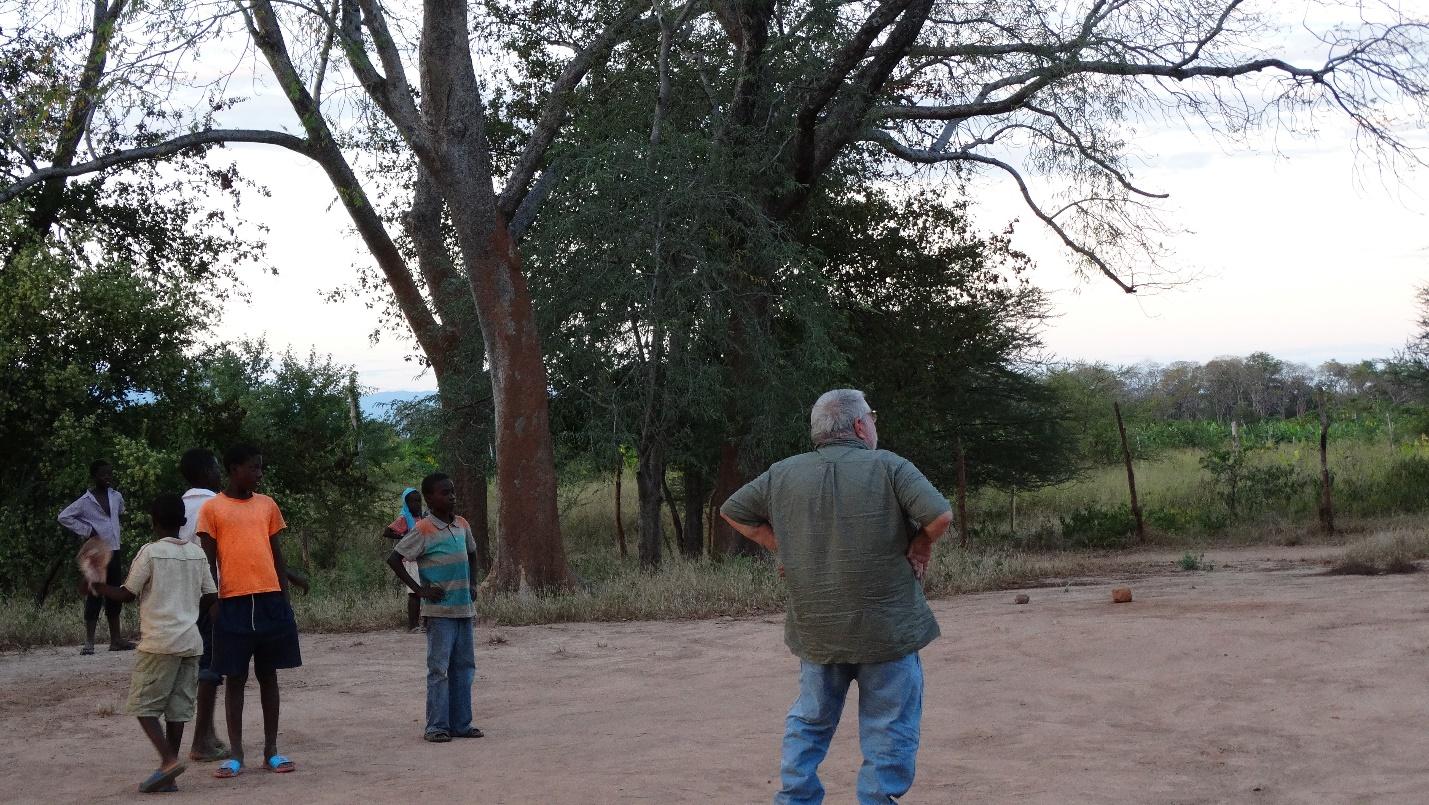 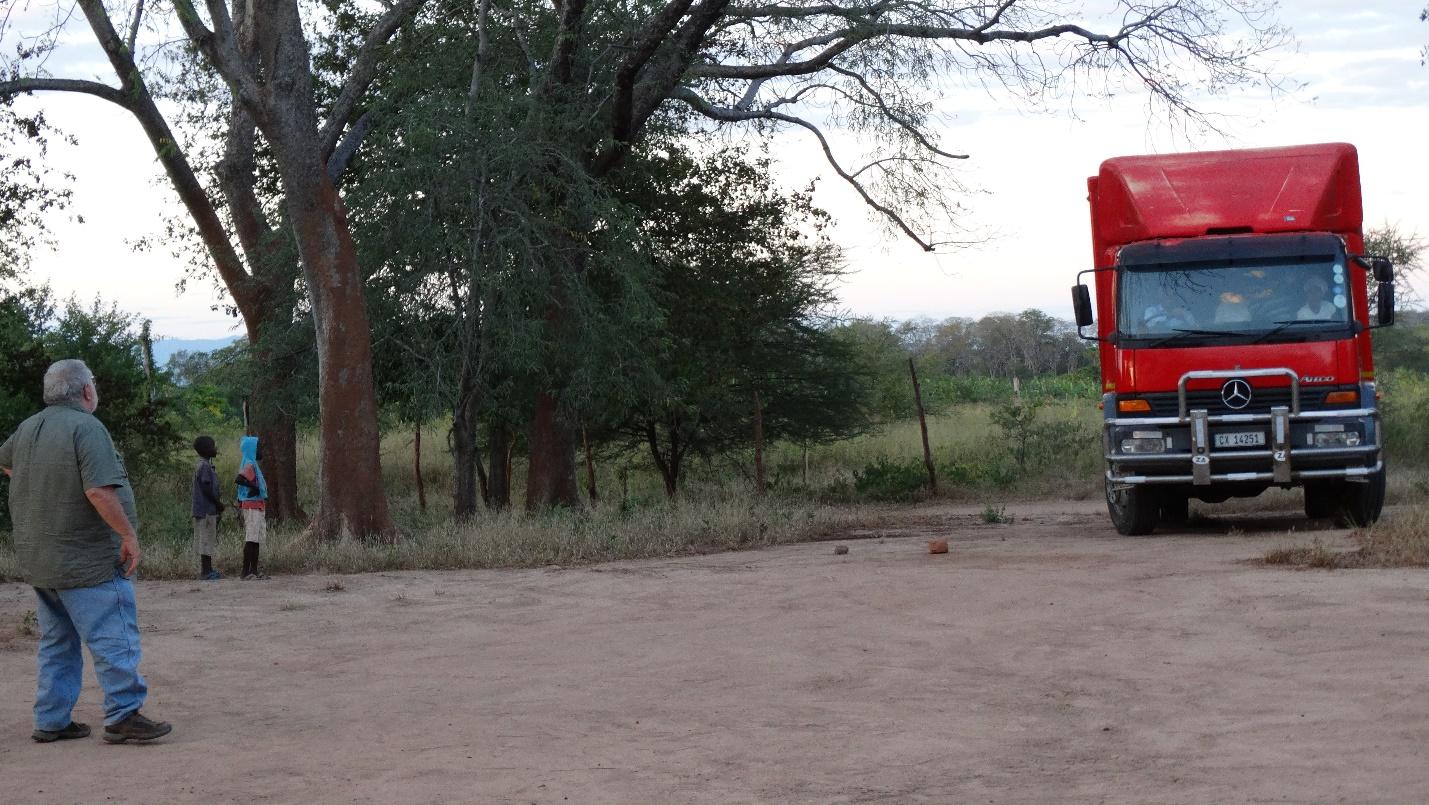 Setting up the Chariot and all the chairs takes about 30 minutes. When all is finished and the PA is up they will begin to run a video of church singing or someone will get on the microphone and begin to call people to come. 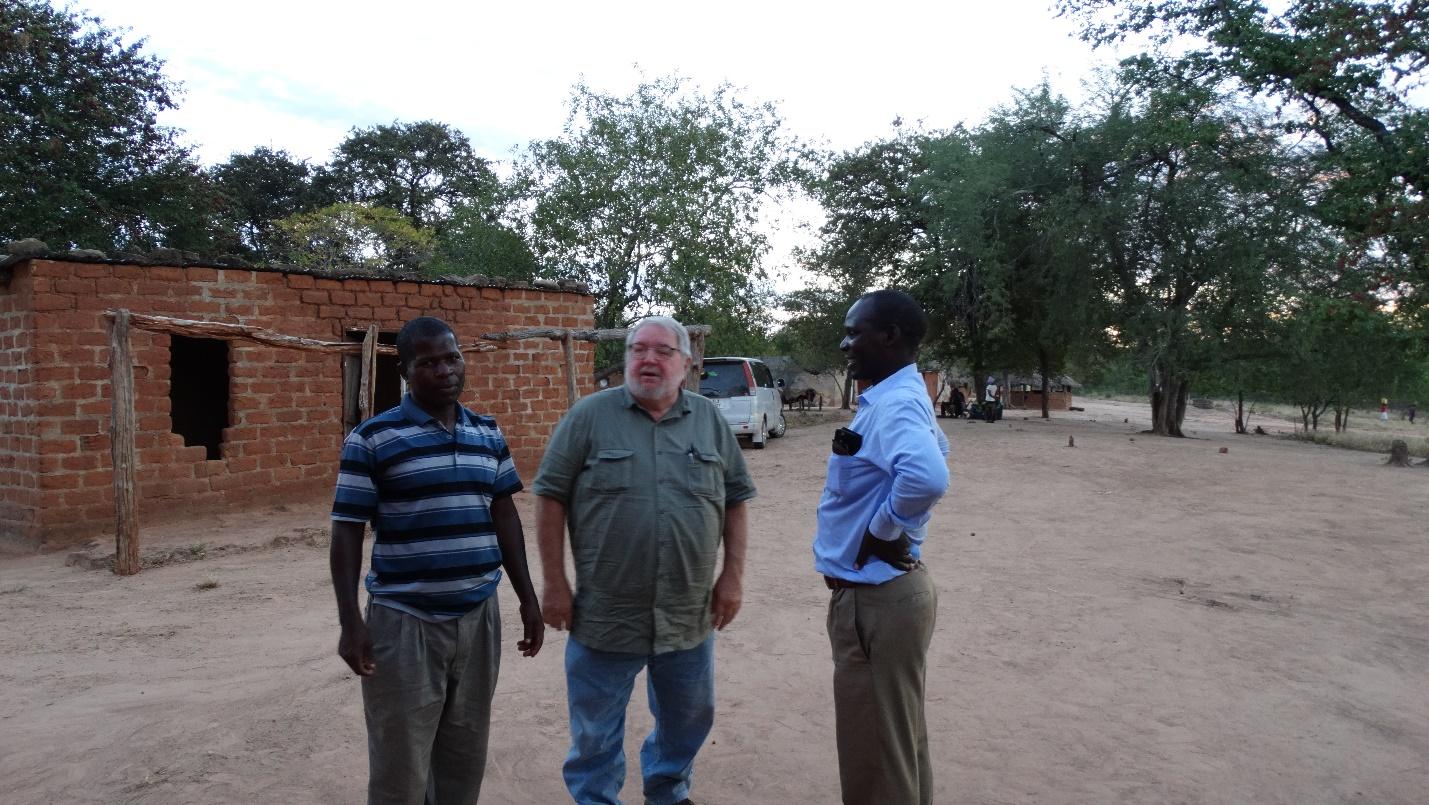 However, due to the delay in setting up and people coming, it is decided that there will only be one speaker this evening. 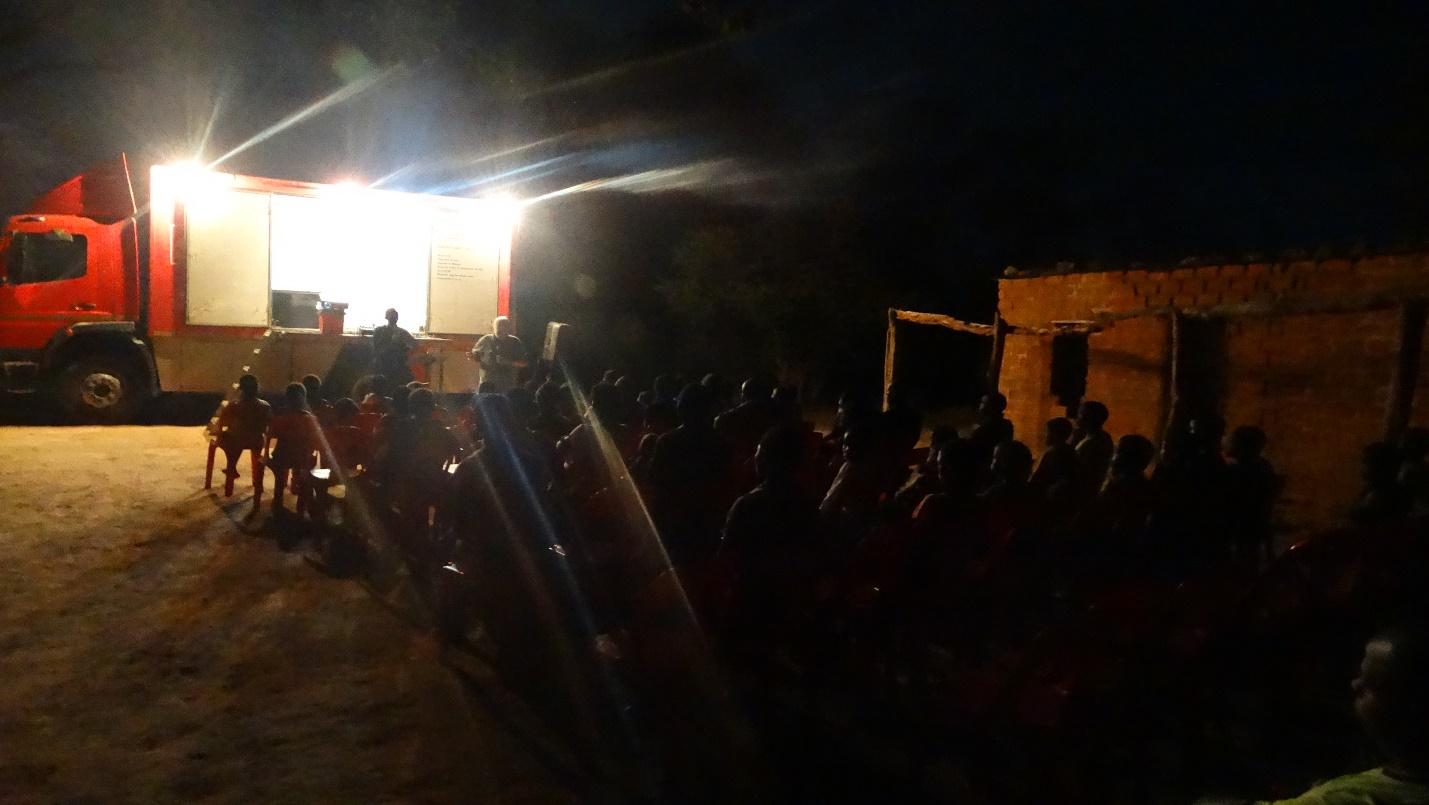 The crowd tonight is not a large as Lumbembe. Many continued to come in during the program including some who came as it was finishing. The Chariot will spend the night. Setting up will not be a problem since they can set things up late afternoon. People know that we are here so, hopefully, they will come a bit earlier.

At the end of the lesson there were no responses. The film finished for the evening and we headed back to Siavonga.

Tomorrow evening we will finish the program in the Siavonga District. Then the Chariot will head north to Lusaka for servicing on Monday. After that we will travel to Chisamba near Kabwe to meet up for several days work. After that, we return and they continue north to the Copperbelt.