The program for today is to have services this morning followed by a congregational meal. Afterwards I will sit with the leaders of the village congregations to hear about what is happening and, likely, hear a list of needs. There will be an evening service using the Gospel Chariot (I learned they would not be presenting their program, but the truck is there and used for the service). There will also be several congregation present. There will be only the service and not bible class.

I joined Charles and his family for breakfast. Breakfast is often buttered bread and tea (hot). After breakfast we drive to the church building to begin meeting friends. The service is scheduled to begin at 10. However, typically for Zambia, many are not there at 10 and only begin arriving at that time.

I decided to study through the first portion of 1 Peter with them. I want to emphasize the idea of being born again means, ultimately, the imitation of Jesus. It is, obviously, my first time to worship with the brethren here…but I enjoyed singing the songs in Tonga.

I was asked, by Charles, to preface my lesson with a brief explanation as to why I had to leave Zambia. After that it was go… 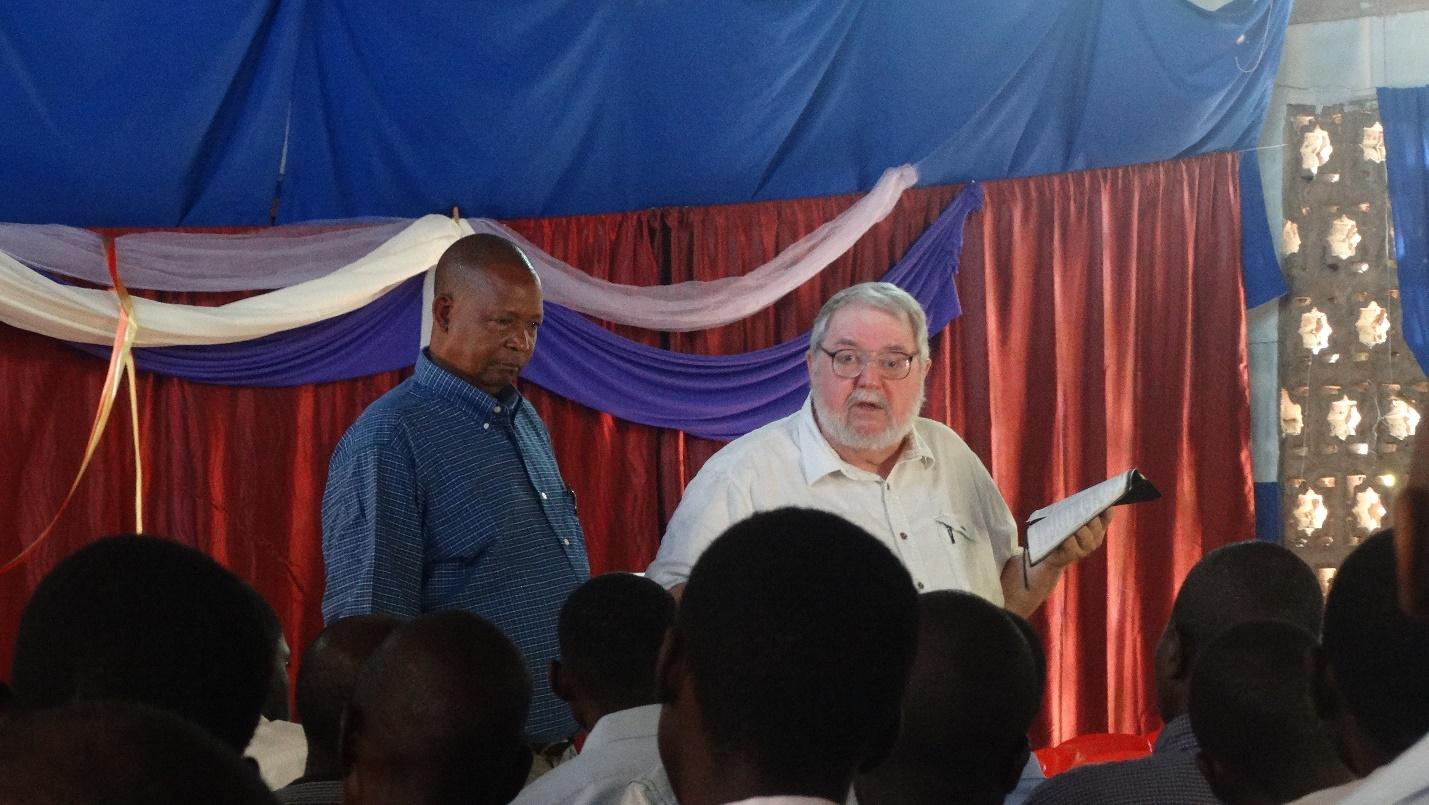 Even tho most here speak English, I always have a translator. I can speak English faster that most can follow. Also, because English is my first language and their second there are some challenges in their understanding my spoken English. But Charles and I work really well together. I forgot how much I enjoy teaching here… When I asked Charles how long I had been speaking he told me it was an hour. In the end I spoke for about 1 ½ hours. The lesson was well received. But, due to it being warm and humid I was quite damp with sweat when it as all done (dripping in fact). The heat here at this time of the year is not like it is during their hot months. It is not quite Texas in the summer but getting close. It is only now beginning to cool for the fall. While they find the cooler weather (and winter) cold, I find it pleasant. 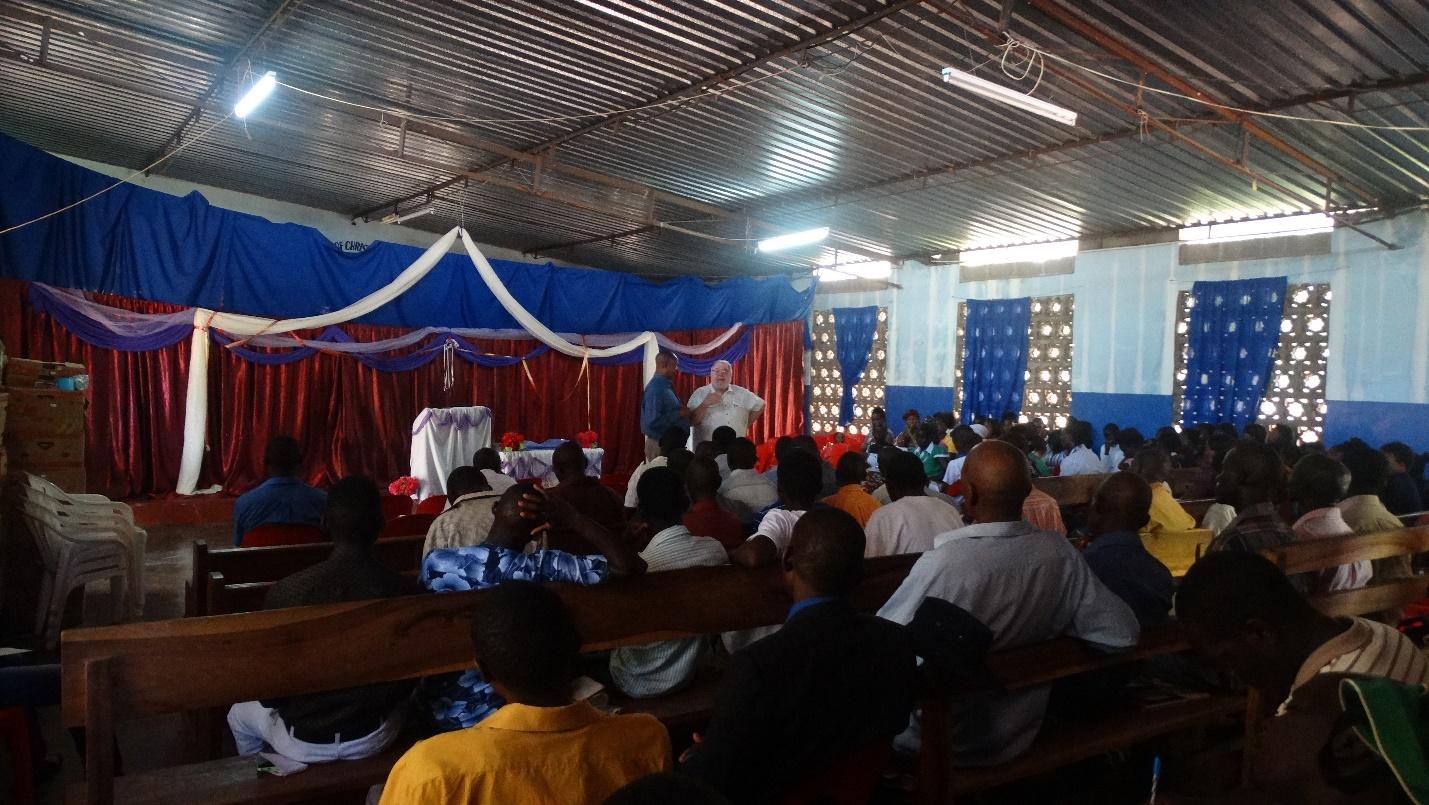 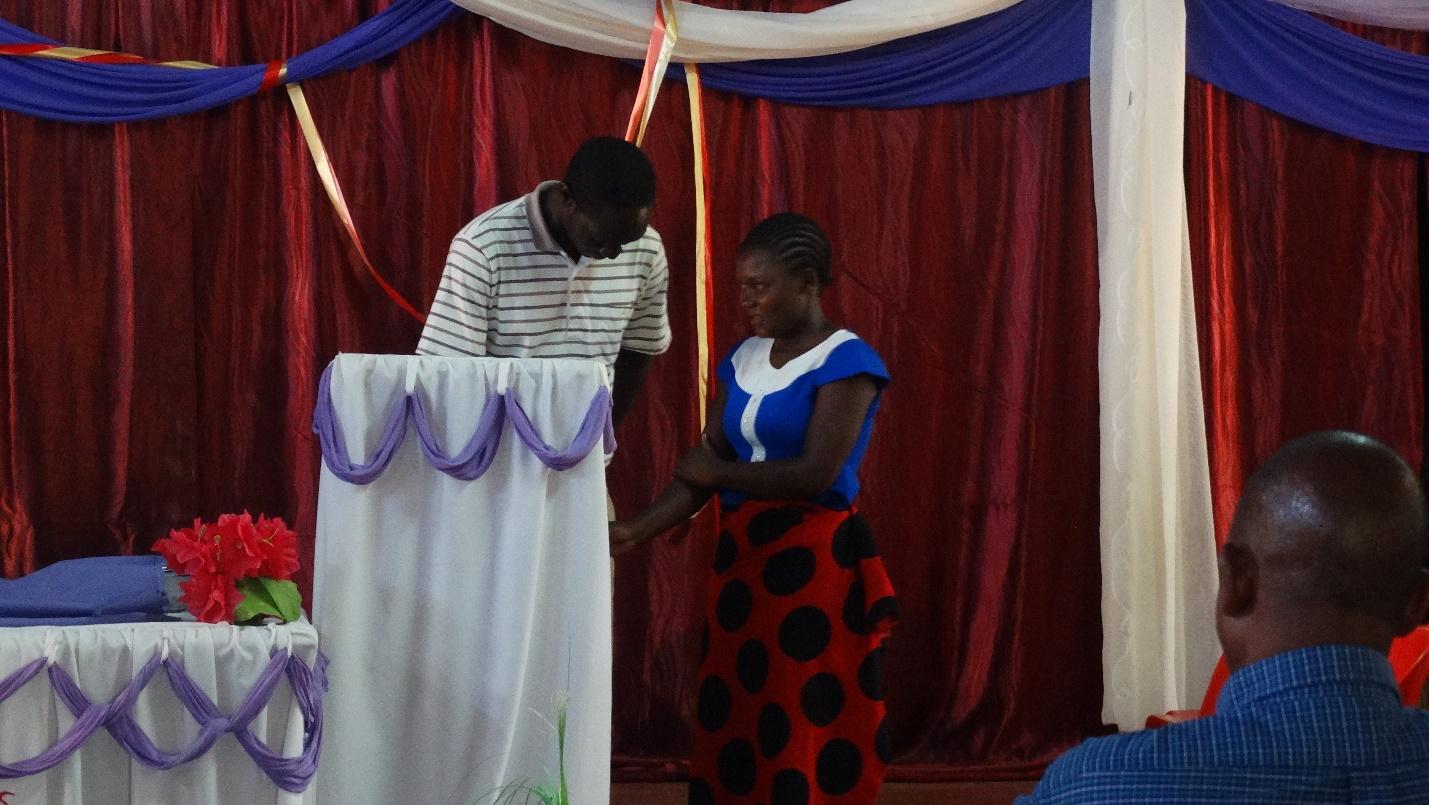 The young lady’s name is Maria Maambo. I have known here since she was born (does that mean I am getting old or what?). She is the daughter of good friends (Fredrick and Helen Maambo). Before it was all finished there were three who were baptized. 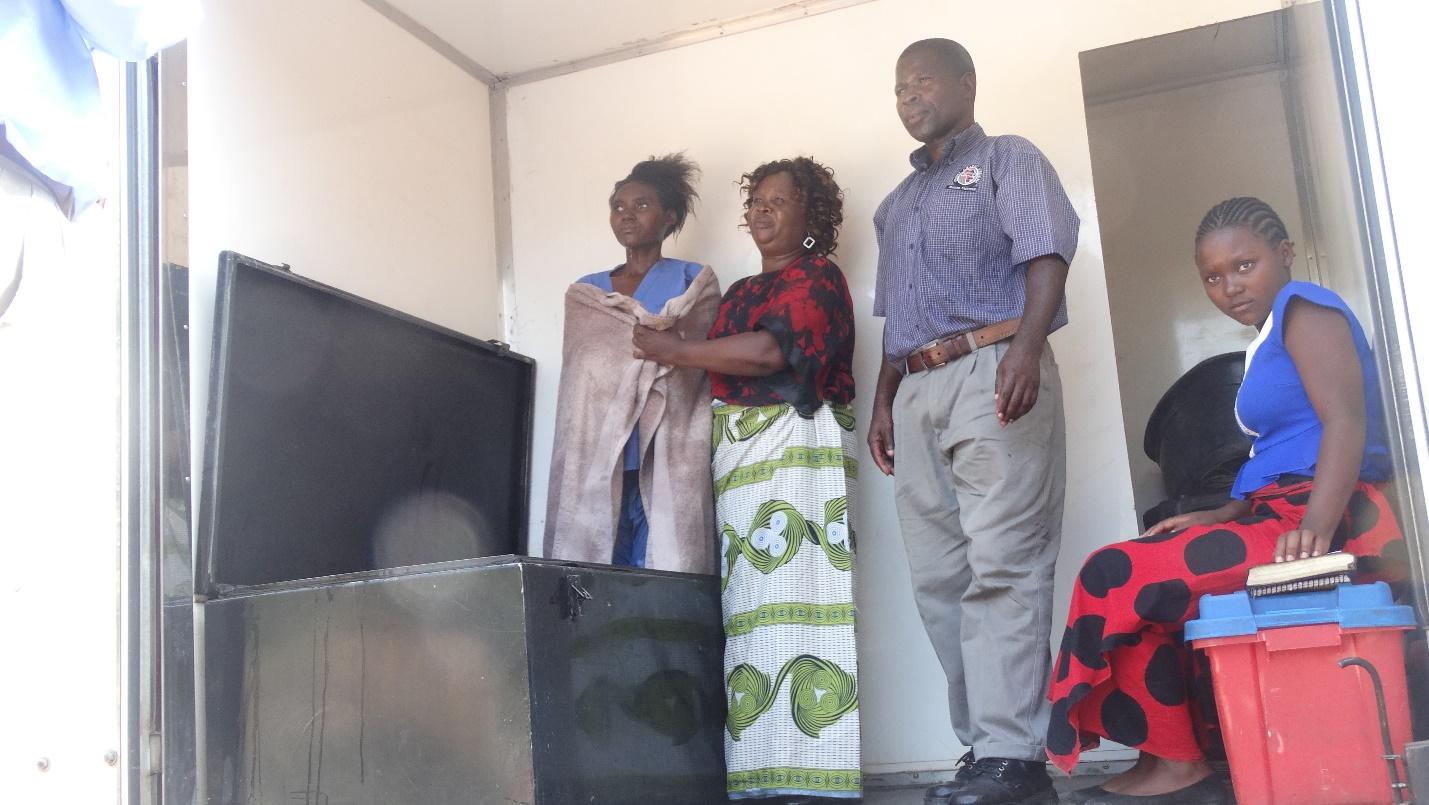 This picture is the baptismal pool for the Gospel Chariot. It is located inside what would be the stage area. The wall behind those standing is the screen for the viewing of the film that is shown. The truck is self-contained. There is space for the two men to sleep, a built-in generator and lighting. I will get some photos of the layout (I was not taking photos yesterday).

The meal that followed was simple. It was beef cooked with onion and tomato, nsima (this is the staple of those in this area, it is finely ground corn that is cooked to the consistency of mashed potatoes) and cabbage cooked with tomato. Everyone sits around a table and all eat from the same bowls. They eat with their hands without utensils usually. The meal ritual begins with washing the hands in preparation to eating. They will occasionally use utensils depending on what they may be served.

Normally the church does not meet in the evening. But since the Chariot is here there was a meeting. They did not do their program, but we used the truck equipment for lighting and sound and met out front of the building. After there was a meal and we called it a day. On Monday we will bring the Chariot to the village Bbendele. It is about 40km from Siavonga. We will be there on Monday and Tuesday.

Today we will be going to Bbendele later in the day. When I went out to the truck and tried to start it would not start. Eventually Peter (a friend at Eagle’s Rest) came and helped get it going. But in driving to Charles it was clear that there was a problem. There is a steep hill near Charles’ house. I could get up it in first gear going about 3 km and hour. The truck is an Isuzu diesel. I think that there is a problem with the fuel filter. It likely needs changed. So…the truck will have to stay parked until the mechanic can look at it and, likely, change the filter. In the meantime, I will have to hire transport, even to Bbendele this evening.

The day was spent visiting. I relocated my lodging to the guest house of good friend Steve Thompson. It is closer to town and will help with expenses. It is nice.

When we arrive at the village the film is already running. The film is the life of Jesus. It is in the Tonga language. Films are rare, so people are quite anxious to be able to see one. The program works by showing part of the film and then stopping it for preaching. Afterward, more of the film is then run before pausing for the night. The second half of the film will be shown tomorrow night. 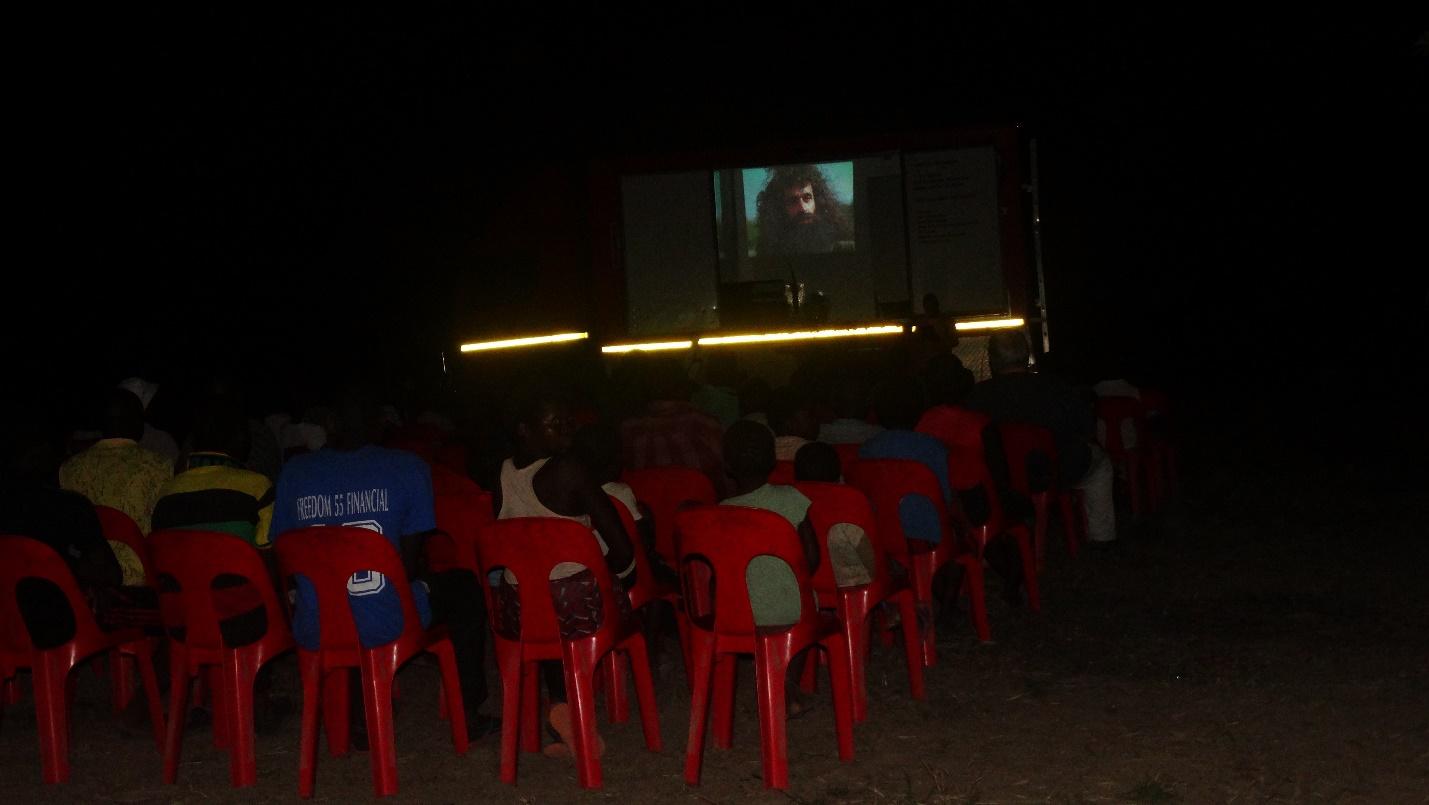 Since it was nighttime it was difficult to take pictures. I will have to work on that. Here is the Chariot showing the film. The chairs belong to the Chariot. The image you see is John the Baptist. When they paused the film, I was the first speaker. 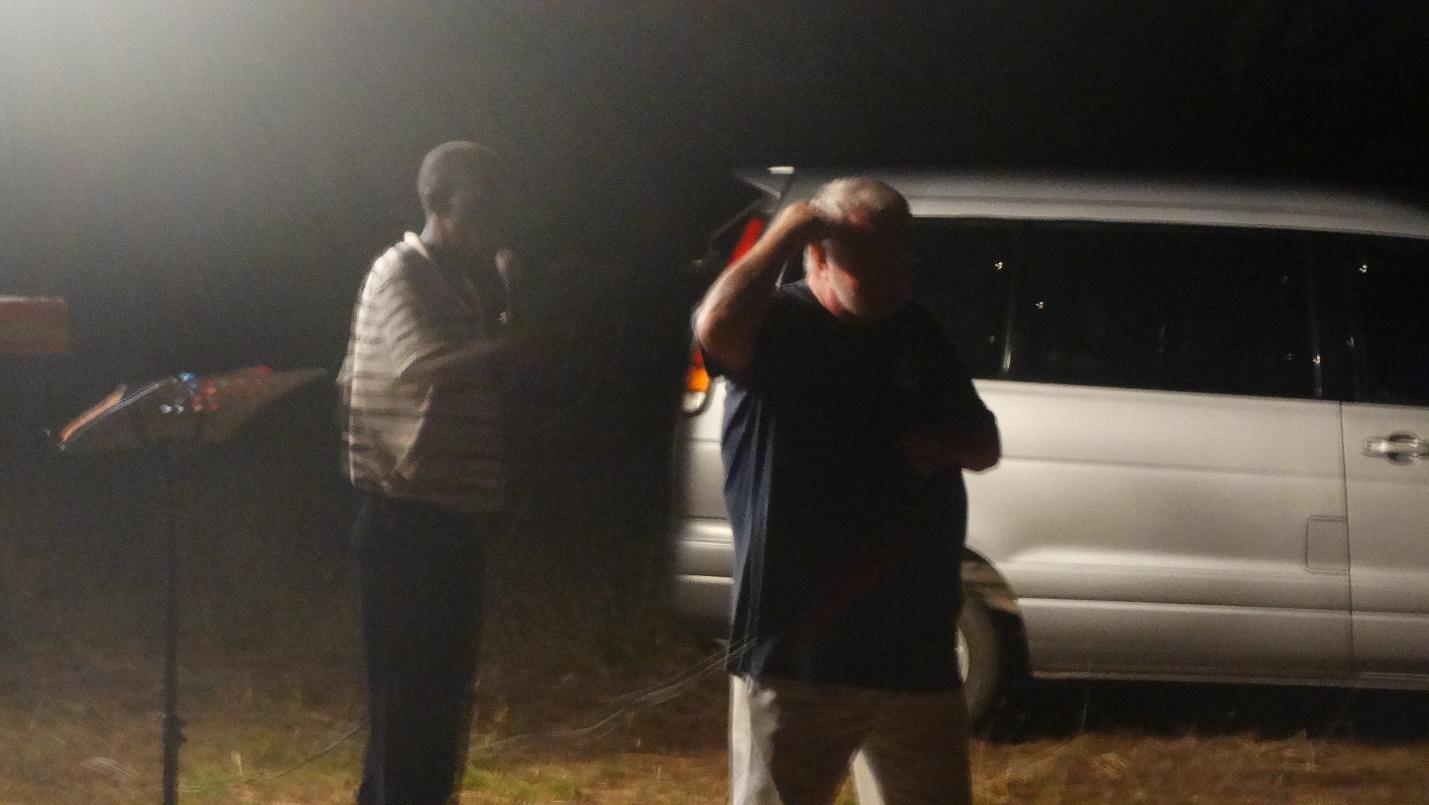 Since the film is of the life of Jesus that was what I spoke of…how he was not like anyone else who had come to Israel. I tried to tie it into some of what they had seen up to that point in the film. When they sang the song one man came forward to request baptism. He has been attending the church in Bbendele but had not yet been baptized. When they were talking with him another man came to be baptized and the crowd began to clap and whistle. He is one of the head men of the village. His choice is significant. Him being a member will help the church’s standing in the village. The head men and usually very respected in the community. 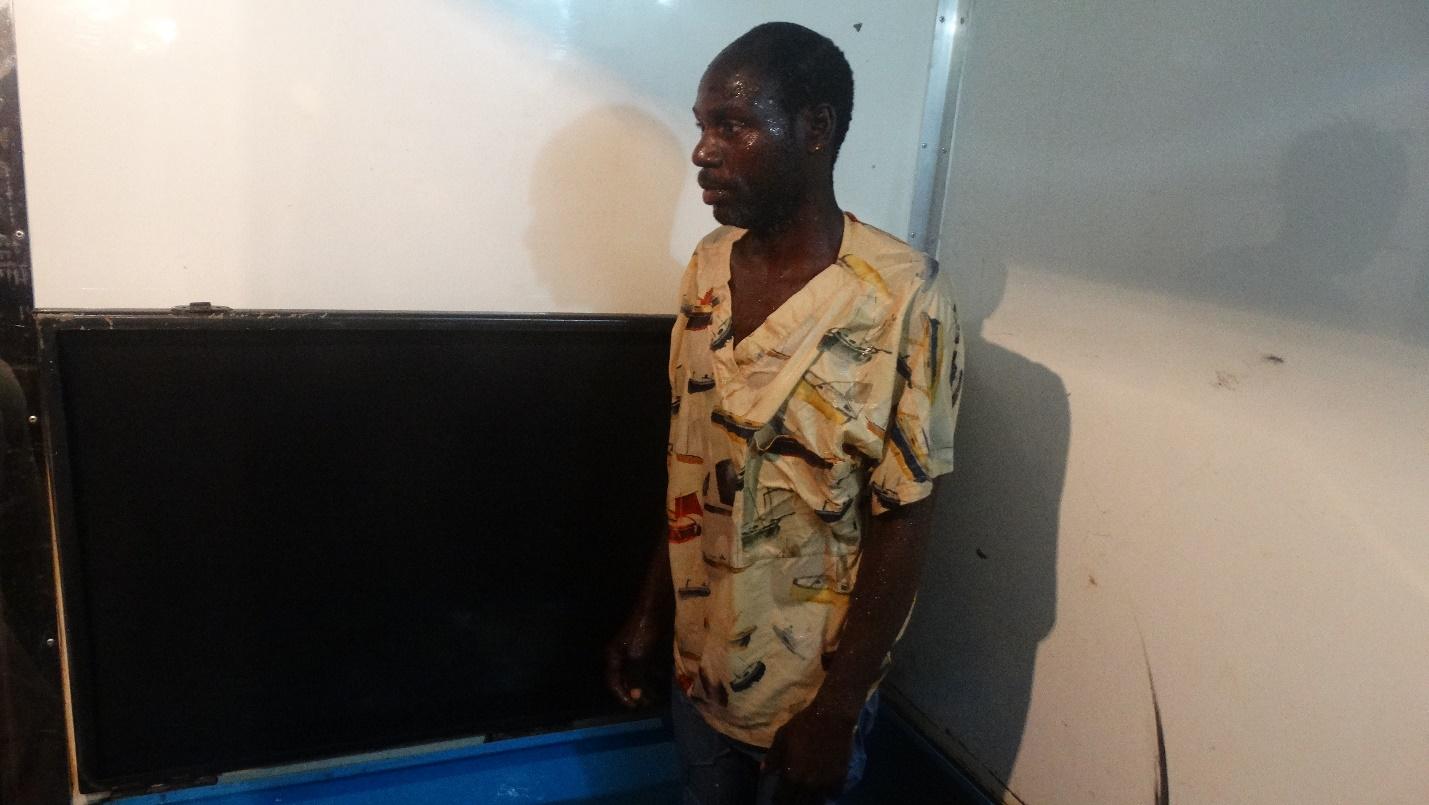 Here is the first man who responded. 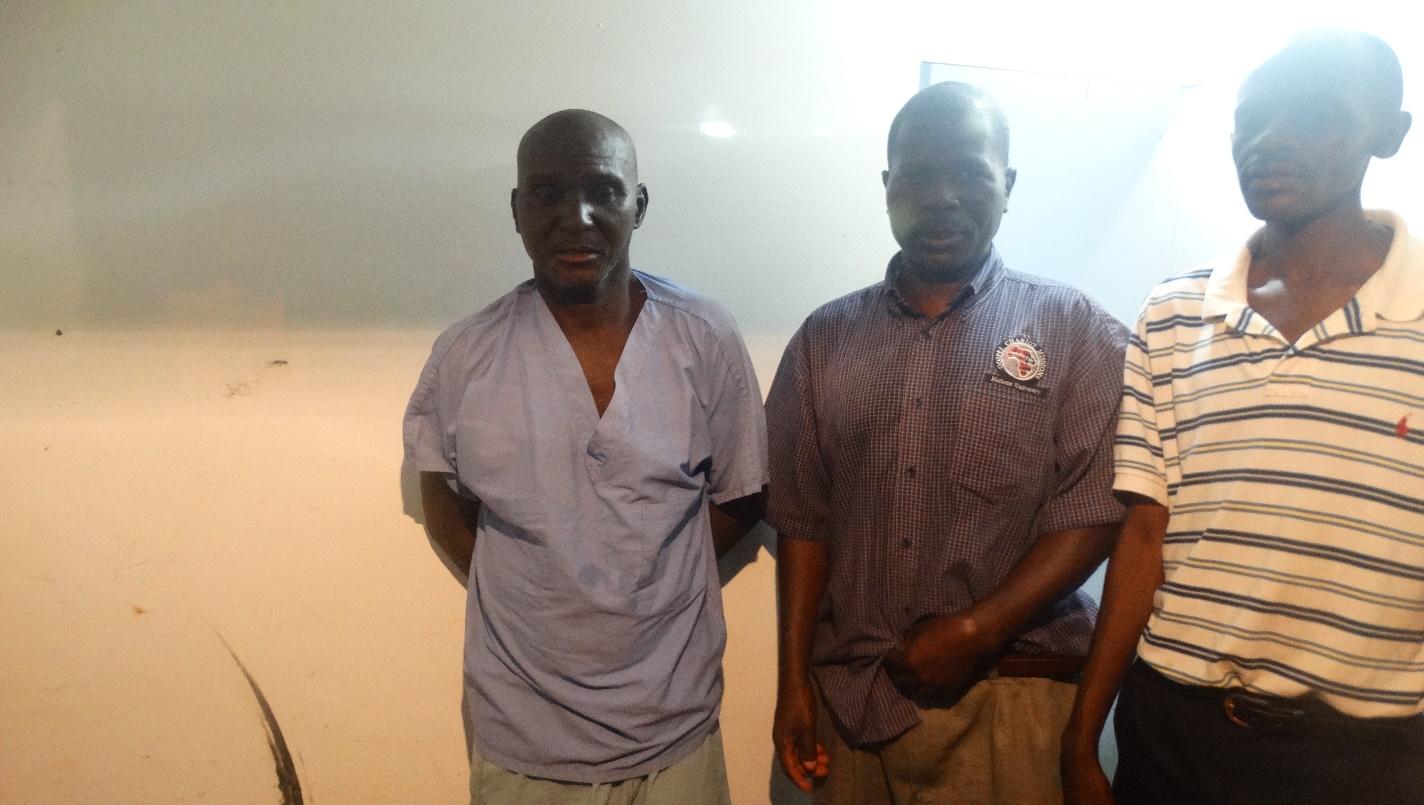 Here is the head man. After the baptisms the second speaker spoke. He is Robert one of the men on the Chariot. He is from Malawi. 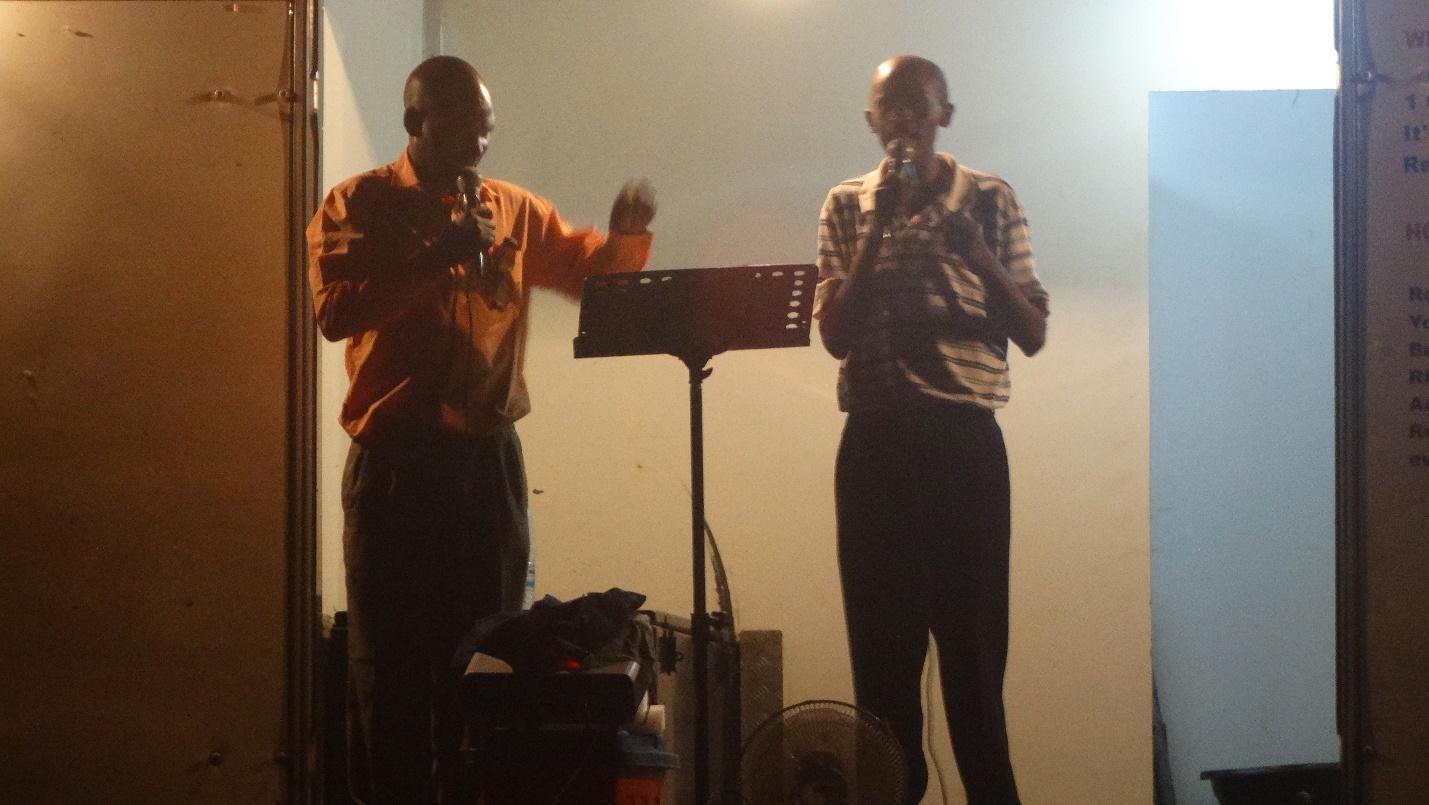 When he finished another responded asking for prayer. After this they resumed the film. They began from the start because there were people who were not there at the first and they wanted to see it all.

Our group sat down for a meal the ladies had prepared and then we left to return. When we got back I went to my room took a shower and went to bed. Tomorrow we are back in Bbendele.

Later today we will be back in Bbendele for the second night of the presentation. Today they two guys on the chariot have to deal with the accident that they had the day before. Damages are to be assessed on the shop that the truck hit and on the light pole. After this they will need to pay the shop owner and the council and then they will be clear.

My problem with the photos is trying to take them at night with the lights is proving to be difficult so I apologize for the quality. But it will let you see what it is like.

Tonight I went out on a limb and attempted to read my first text in Tonga. I have not done this is over 2 years so it was a bit rough. The small print and poor lighting did not help but I did get through it. I was reading all of the texts in Tonga before I came home. I may try to continue but in better light. At any rate they did not laugh, but then they never do. 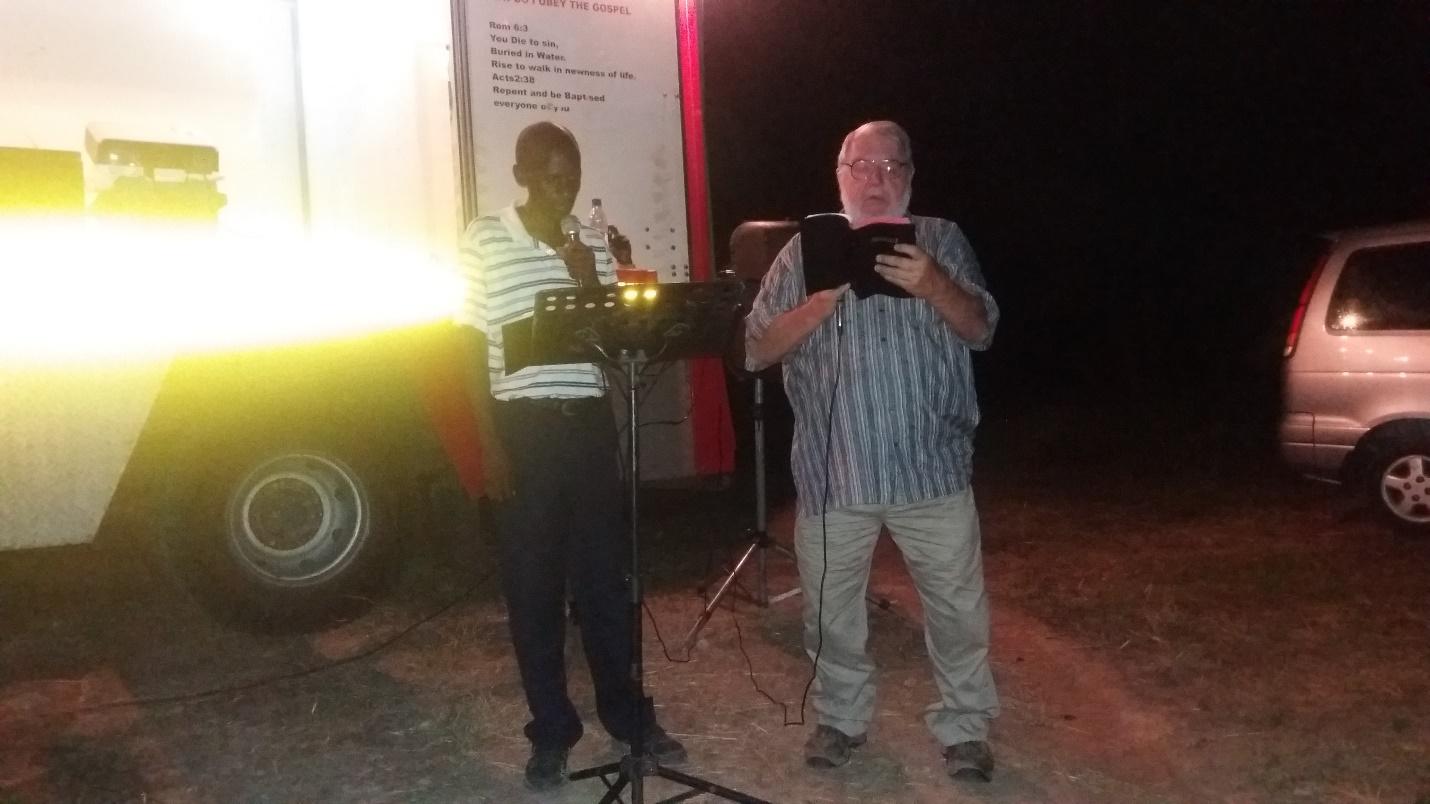 The other challenge for me is that I do not normally use any kind of amplification in Zambia. I usually do not need it. I do not know how I would do without it but it is there. This means that I have to hold the microphone in one hand. Since the Chariot is outdoors and (though not real loud because it is on the other side of the truck is the sound of the generator).

After the lesson there was on who came to be baptized. 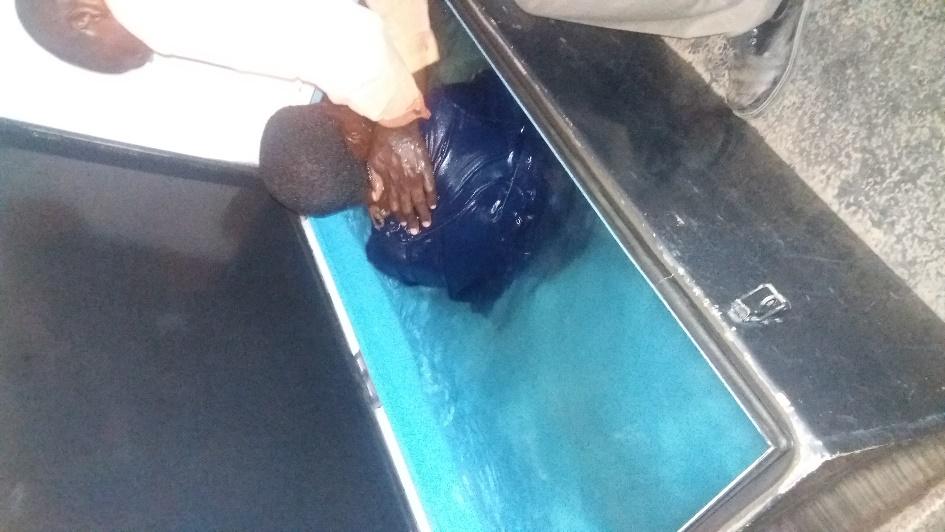 Attendance for each night was about 130. That is good considering that Bbendele has about 800-900 residents.

Tomorrow night we will be in Lumbembe which is a bit farther from Siavonga.