Each year in September all the village churches gather for a three day lectureship. September was chosen because earlier in the year there are crops in the field that must be monitored and many cannot come for the time allotted.

A great deal of planning and preparation goes into the lectureship. First of all a temporary shelter must be built in order to provide shade for those who come. It is usually made from poles and millet (really tall sorghum) stalks. The poles provide the structure and the stalks provide the shade. It takes time to collect and then construct the shelter. Part of the construction is providing seating. This is usually in the form of poles placed parallel to the ground.

Since people are coming from some distance food must be provided. Feeding several hundred people cannot be done with a bit of meal and a chicken. Then meals need to be provided over several days which compounds the challenge.

One aspect that we have been working on for the last couple of years is moving toward the various churches contributing toward the supplies and especially their own transport to the meeting. In the past the transport has amounted to a significant amount of money that was only getting bigger. The result was that many were coming but it seemed to be more of a holiday for them rather than an opportunity of study and fellowship. The result has been that the congregations have done well in providing for their own transport. It has mean the numbers present are fewer but mostly those who are here now want to be. Our final number for this year was 372.

Our study for this year was the book of Philippians. I wanted to begin to emphasis more of the inner man aspect of Christianity. That being a Christian is more than just the outward profession or conformity but comes from within as who we are is shaped by the example and teachings of Jesus.

From the reports it was a good effort. Accompanying me this year in addition to Audrey were Audrey’s brother Tom Holmes and his wife Denise. Tom delivered the Sunday morning sermons and was well received. 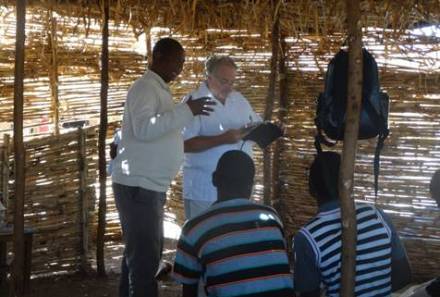 During the weekend there were 7 baptisms. In the dry part of the year baptisms become problematic due to a lack of places to immerse. One thing we have tried is using what the locals call baptismal tents. There are inflatable pools. The problem is that the size that is manageable is usually too small for a man. For the first baptisms the pool was used to the next day they were taken to a small pond that still has water and were baptized there. The job was done but it took some thinking to find the best place. There was a closer pool but it was shallow and very muddy this time of the year. 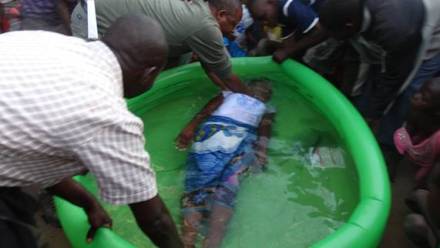 There was a pond near Nabbanda that still had enough water in it some we went there.

As you can see even here there was not a great depth of water but it was enough.

At the end everyone was pleased and enjoyed a good fellowship. It was a success.

Tomorrow (today as I am writing) we will be working on a couple of wells. Tuesday we return to Lusaka. Audrey, Tom and Denise will be flying out on Wednesday to return to the States.