Things just seem to happen “out of the blue” in what we are doing in Zambia. We received an invitation from the government power company (ZESCO) to attend a special ceremony “commissioning of the Kariba North Bank Power Extension Power Station and the hand over Siavonga High School.” It was revealed that we were the only religious group invited to the ceremony.

When Charles attended (they did not know that I was not in the country at the time he ended up sitting next to the President of the Republic of Zambia who was interested to learn about our work with wells and the medical that we do in the village from time to time.

Unfortunately, at this point, a picture in not available of Charles and the president. But what it does indicate is that our work with water and the people in the villages is known even to those in the government. That can only work to the advantage of our efforts in Zambia in the future. As I said this invitation came as a complete surprise. We do not keep what we do a secret but as a rule we operate on a very low key level doing what we do with little fanfare. It is known who we are but we do not make our work conditional on the villagers supporting the church. But, it has very clearly impacted people so that they do inquire and even seek us our to answer their questions and to know more about the church of the New Testament.

Charles also reported that the different denominational groups in Siavonga were upset that we were the only ones invited to the ceremony. Coolhuh!

We finally completed our work program begun earlier this year with the drilling of the last 3 wells. This has been quite a journey for a number of reasons.

The funds were made available earlier in the year so that we could get our work onto the driller’s schedule. We did not want to drill earlier because you want to put the wells down when the water table is low to make certain that the wells do not go dry during the dry part of the year when the table is lower. 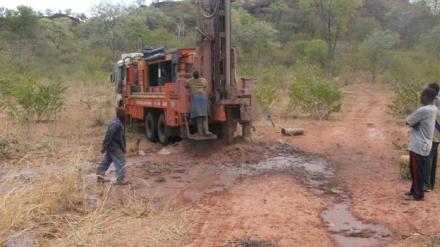 There was some delay waiting for a new rig to arrive. It was dispatched to the Mazabuka area. But, it seems that the crew was doing work on the side with the rig that was unknown to the owners. In the process they damaged to rig. All this caused significant delay. When all that was worked out the rig arrived in managed to drill one good well and 7 dry holes. I have since learned that this is a real problem for some reason. The council had tried 15 times and got one good well. On top of that two wells in the village of Nabbanda have gone dry. This is something that has never happened. All this may be due to the really poor rains for the last 3 years. The water table has dropped lower than it has been in years.

The rig finally returned two weeks ago to finish up the drilling. We still had several dry holes but finally succeeded in finishing up the wells that were planned.

Altogether we have repaired 15 wells and drilled 4 new ones. The funds have been generously provided from donors in the US through Healing Hands International. Our thanks and gratitude is extended to these generous brethren.

With the holidays upon us we would like to will all well during this time of family and faith.