I really do need to get better about regular posts to keep everyone up on what is happening in Zambia. I tend to wait until there is new to report but perhaps I should just drop something every so often. 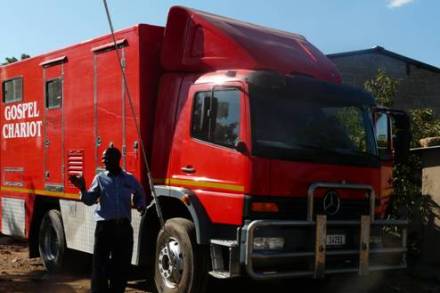 I spoke with Charles Phiri today. The Gospel Chariot is in the Siavonga area for a couple of weeks. As of this afternoon they have baptized 14 individuals. That is a good result. The program will be ending today or tomorrow. They usually have pretty good results in the district. Last year there were 65 baptisms. However they remained for nearly a month. This year they will only be there for perhaps two weeks.

For those of you who do not know the Gospel Chariot is a truck equipped with living quarters and a stage and broadcast system as well as a baptistry. It comes out of South Africa and travels (at this time) to Malawi. Their program is to show a film over two nights of the life of Jesus. During the time they stop the film and someone speaks to them of the gospel and then they finish the film. They carry chairs to seat at least 150 people. They also distribute World Bible School materials and collect them for scoring. The program is operated by George Funk and his wife in South Africa. It has been a fairly productive effort. It is generally productive in the Siavonga District because the churches put some effort into the program and make arrangements ahead of time. Other locations that do not do this preparation and work with the program are not as productive as it has been in Siavonga. It is especially effective in the villages where the chance to see a moving picture is almost unheard of so a ready audience is pretty much assured any time they show up. 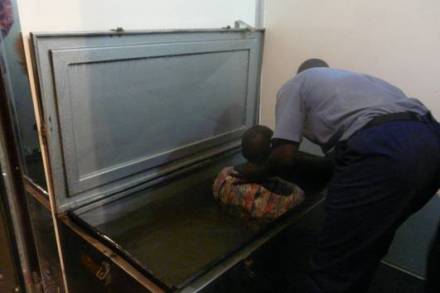 You can see in this picture the use of the baptistry in the truck.

My trip is on schedule for August 25th. The schedule remains generally what it was at my last post. But we will be confirming some of the schedule by the end of next month.